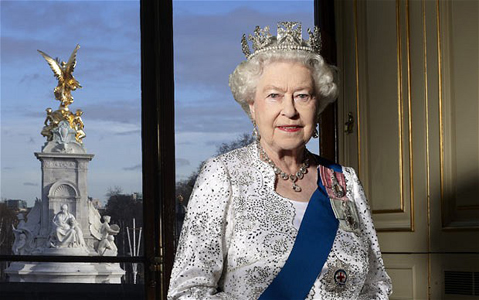 HM Queen Elizabeth II…EMBARGOED UNTIL 0001am MONDAY FEBRUARY 6TH 2012. Official Diamond Jubilee portrait of British monarch HM Queen Elizabeth II photographed in the Centre Room of Buckingham Palace, overlooking The Victoria Memorial Statue, which commemorates the reign of Queen Victoria (1837-1901), the only other monarch to celebrate a Diamond Jubilee (1897). At its pinnacle is the gilt-bronze figure of Victory. In this portrait taken to mark the 60th anniversary of The Queen’s Accession, Her Majesty is wearing a State Dress by the designer Angela Kelly and the State Diadem Crown. The Collet Necklace pictured was worn by Queen Victoria on the occasion of her own Diamond Jubilee. The sash is the blue Garter Riband. EMBARGOED UNTIL 0001am MONDAY FEBRUARY 6TH 2012. FIRST USE ON THE 5TH AND 6TH OF FEBRUARY IS FREE. THEREAFTER FEES WILL APPLY. TO AVOID CONFUSION, PLEASE DO NOT ARCHIVE.